Trader Joe’s is one of my favorite places on earth. I’ve been going since I was a kid, and I think just about every single one of my friends in college was forced to try one thing or another from this divine grocery store. 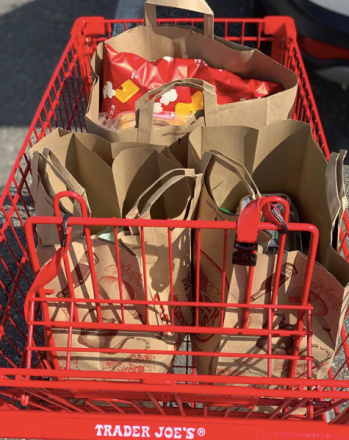 I text friends on a pretty regular basis what all of my new Joe’s finds are, so I figured I might as well make a weekly blog post about it. This week we’re in for a real treat too, because they happened to have my favorite fruit in the entire world. You guessed it:

1. Cotton Candy Grapes
I tell everyone about CC grapes. They literally taste exactly like what you would get at the circus or the fair, but aren’t unhealthy! The coolest thing is that they are still organic, despite being some sort of weird hybrid grape. I eat them by the pound, and hope they’ll still be around in a week or two so I can get another giant box.

2. Sea Salt & Turbinado Sugar Dark Chocolate Almonds
That name is a mouthful, and you’ll definitely want to take one of these dark chocolate almonds once you try them. I got hooked on these when I was in college, and they were a great breakthrough to how amazing dark chocolate can be. Even my husband — who hates dark chocolate — eats these by the fistful. They have a perfect sweet and salty mix, and are wildly addicting. 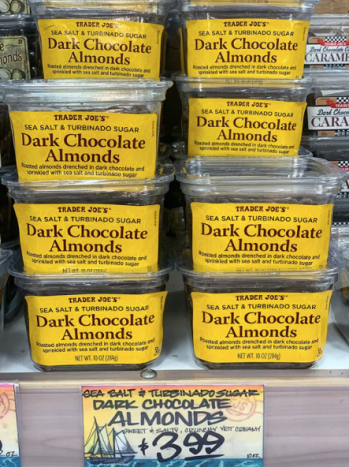 3. Movie Theater Butter Popcorn
Speaking of college, you could always find me studying with a snack, particularly the perfectly buttered bagged popcorn from Trader Joe’s. It’s almost as good as the real thing, and is way too easy to eat an entire bag in a sitting. I still always keep a bag or two in our pantry because my chocolate lab, Jax, and I enjoy splitting it while watching Big Brother or a goofy Hallmark movie. 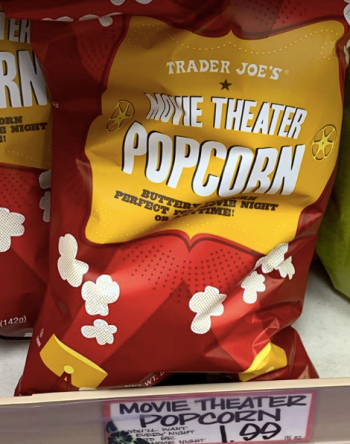 4. Sparkling Watermelon Juice
PLEASE make this a staple, TJ’s!! It breaks my heart that this is a seasonal item because I would like to have these year-round. There came a point where I stocked up on 6 boxes of juice, but sadly I am down to one can now. Hoping they’ll bring it back soon, but if not I’ll be stocking up a lot better next season so they’ll last me at least a few months. 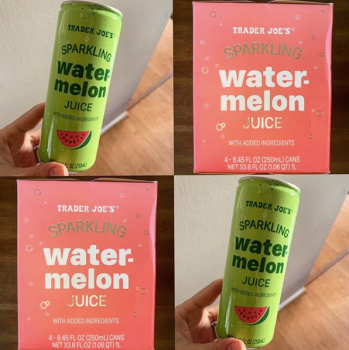 5. Vitamin E Oil
This is a very recent discovery, but I’m already obsessed with it. You can get this serum for about $5, and it’s amazing to create hydrated and smooth legs after shaving. It felt really great and I would never use it on my face, but it’s really nice for a little extra body shimmer. Just be careful about how much you put on, because it becomes a little greasy quickly. 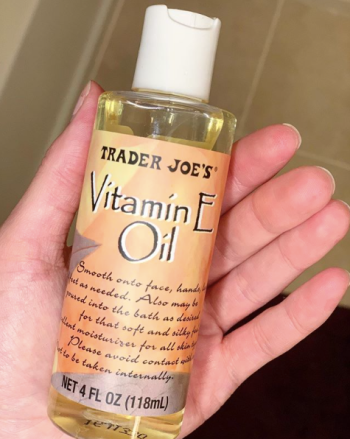 Well, that’s all for now, friends. Next week I’ll be posting five new pumpkin things to try at Trader Joe’s, in honor of them bringing out their fall collection. Last year I bought a bunch of pumpkin pancake mix at the end of the season so we could enjoy them year-round. You never know when seasonal items at TJ’s might sell out, so it’s always good to stock up when you can.

Salads are making me go crazy.

I recently started a gluten-free diet to try and reduce some inflammation for one of my chronic illnesses. A catch-22, though, is that I also recently found out I am allergic to tomatoes and potatoes — foods that seem to be staples in a gluten-free diet — along with a small array of other fruits and veggies.

I did this as I do many things and just went cold turkey. I didn’t try to ease into it, and frankly didn’t do any sort of research whatsoever before making this big change in my diet. I’m all about carbs, and actually need a lot of them to function with POTS.

Anyway since I’m so clueless, I’ve basically been eating a diet solely consisting of Greek yogurt, eggs, and salads. Throw in a lot of dark chocolate and that’s my day.

I’m beginning to get really frustrated, as I have lost some weight that I would have liked to keep, and feel tired and dizzy without my pretzels and crackers.

The other day I realized how grumpy going gluten-free has made me after I ordered a salad at the Nordstrom cafe and moved toward the checkout. My mom casually said, “Do you want dessert? Those cupcakes are beautiful!”

To which I replied with a loud and flustered, “Mom, I can’t eat that; it’s not gluten-free!”

I immediately realized how bratty I had been and felt my face turn red from embarrassment. I mumbled an apology to my mom as the pastry chef glared at me from behind the counter.

Now that I’ve gotten through a few weeks of this I am realizing I need help. What kind of GF items do you like? What websites might help me find new meals to cook? I cannot keep living off of salads!

I live outside of Washington DC, so we are over 1,000 miles apart. I used to date someone from Texas, so I got to visit you regularly, but he and I broke up awhile ago and I haven’t been back since.

I miss you, Torchy’s. What I really miss most is your queso. I never even liked dip until I tried yours, but I quickly became addicted. Every time I’d go to Texas I would make sure to visit you several times a week.

So I have a crazy request.

Could you please send me the recipe so I can make my own here in DC? It doesn’t appear that you are moving here anytime soon and I’m not sure that I’ll ever find anyone who makes queso quite like you.

I’ve been on some great dates lately and am excited to write about them. I’m going to start with a kind of simple one, but it’s easily one of the best dates I’ve ever been on.

One of the guys I’ve been talking to and I made a bet. It’s not really important what it was about, but I was so sure I was right that I agreed the loser would make dinner.

We quickly realized that I was wrong (Girls, don’t worry — most of us are always right, I am just the exception to that rule) so I had to begin planning.

Being the great gentleman he is, my date said that he would go ahead and take care of most of the dinner anyway — all I had to do was make one of the three recipes I can actually cook. I decided to make fajitas, as that appears to by my fanciest dish.

The night turned out to be hilarious. When we got to his place he began preparing the appetizer he had promised. This turned out to be much more complicated than my entire fajita entree. I was such a goof and got too distracted talking to his roommate to help make the first course, so by the time I gravitated back behind the kitchen counter again he was all done and it was time to try the appetizer.

He kept working on cutting up chicken for our meal, so I began prepping the vegetables. My date quickly informed me that I was doing it completely wrong. He was worried that I would cut my finger, as I was holding the pepper in my hand and slicing the knife through to the other side. He was probably right, but I figured I could save us some time and chop the veggies while he finished using the cutting board for his chicken dippers.

I asked him what he thought about my cooking skills after our date and he said,

“When I saw you over by the sink I felt like you’d never cut a pepper before and I was afraid you were going to stab yourself because you weren’t cutting it properly against the counter or on any sort of surface.”

Needless to say, he ended up taking over the vegetable cutting duty too.

As he was doing some of my work for me, I took my marinated chicken out of the fridge and started heating olive oil in a wok. Being the person I am, I forgot about the olive oil until it started making a lot of noise on the stove top. I hurried over with my chicken and before I could think about what I was doing I dumped it all in the burning oil. In hindsight I should have turned down the heat.

The entire dish started yelling at us and popping all over the place. Olive oil exploded onto the stove top, and I giggled as he ran over to fix my mistake. My date calmly and quickly turned the heat down and shook the pan back and forth to slow the burning process.

When asked about this incident, he said,

“I had to rush over and turn the heat down. I figured you probably didn’t realize how hot olive oil can get. You seemed to be kind of inexperienced at working a stove like that and I didn’t want droplets of olive oil to spray off and burn you!”

I definitely had a backseat driver while I was making my entree dish, as he kept waltzing over to add pepper or other little spices to the mix, but I certainly didn’t mind. I’m always game for extra help in the kitchen (And as you can see I kind of need it).

Our meal ended up being fantastic, but the best part was just having so much fun making it. I loved being able to laugh through cooking a ridiculous meal together, and we topped the night off by playing some Super Smash Brothers. I’d say that’s an overall win.

Today’s lesson: I’ve decided it would be really awesome to date a guy who can cook. Eating is one of my favorite activities, but I’m not necessarily gifted in the cooking department. My baking abilities paired with someone’s cooking abilities would make us an unstoppable duo.