I went through the first breakup of my entire life just over a year ago.

In all honesty I was absolutely terrified about re-entering the world without my significant other by my side. Many of my single friends seemed to hate being “alone” and I watched girl after girl get dumped, and either get back together with her ex or find a new guy within the matter of weeks.

Being single must really suck, I thought to myself. After all, some people I knew went to great lengths to be in some sort of a relationship, even when it wasn’t the right one. Others complained about how hard it was to find a great guy, and wondered aloud whether they would always be single.

I never had a problem being by myself before — I was actually super-single until I was nineteen. I was a late bloomer and honestly didn’t care about my relationship status (Or lack thereof); my first boyfriend just kind of fell into my lap, and then stuck around for another 5 years.

The scariest thing about a breakup, to me, was that I didn’t have any female role models in my life who I felt managed their breakups well. I’m sure I have plenty of friends who did, they just didn’t talk about how terrible a breakup felt while they were going through it, and I didn’t really realize at the time how hard it is to leave someone you are so comfortable with.

If I could get one message across to the girls (And guys!) who read this blog, it’s that being single does not mean you are lonely. 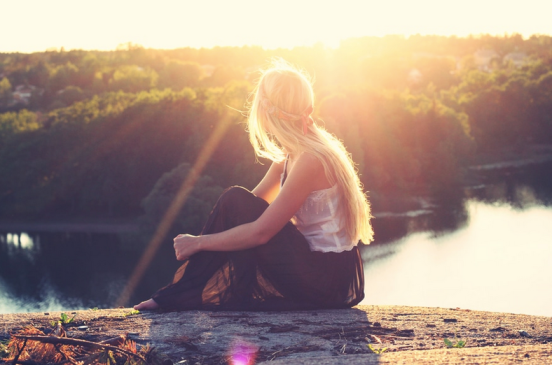 After months of fighting the inevitable, I finally took the leap of faith alone. The uncertainty of the situation was terrifying, but I knew I had an army of friends and family who would help me through my first breakup. Just because I didn’t have one particular person to look up to about being single didn’t mean happy single people didn’t exist. This was when I decided to be my own role model and choose the way I wanted to look at being single.

Part of our breakup wasn’t a choice; my boyfriend and I were going to break up, whether I liked it or not. The loss of someone who had been such a rock in my life was devastating, but I was strong enough to get back up on my feet and keep going through life. My friends were amazing and 100% there for me, whether it was during work hours or at 3 in the morning. I really do think breakups are one of life’s biggest pains that almost everyone can be empathetic toward. There is something about that terrifying time in your life that most people can relate to, so they gather around to help in any possible way they can.

Once I was out of the relationship I felt free. I realized being single meant I could find the right person for me one day and that in the meantime I could have fun with my girl friends and my family. I was no longer wasting time my time with someone who wouldn’t be there for me in the long run, and was able to build on other relationships — one of those being my relationship with myself.

I have so much more to write about singleness and breakups, but this is a good start. I just want to be very clear in saying that being single is not a terrible, lonely thing — it is a great learning experience and an amazing time to grow if you allow it to be. Just because you have a friend or two who don’t like being single, does not mean your fate is sealed. Be your own role model, and your own best friend. After all, you know what you need better than anyone else!

Today’s lesson: Instead of running into a new relationship you can develop your own interests, meet new people, and strengthen friendships with people who will be around for the long haul. No matter what happens in life, you will always have yourself, so you might as well become the best version of you to live with!

14 thoughts on “Singleness Is Not The Same As Loneliness”