Guys, I’m almost there! I have season 7 to finish today, then I can watch the premiere tonight! I’ll definitely have to rewatch the series one day because I’ve been rushing a little the more I am running out of time, but I’m so glad I’ve been able to get this far. I am currently watching the start of the most recent season as I am writing this, so I have faith I’ll finish it up.

Everyone has been really active about messaging me on Instagram, which has been so much fun and a good way to get all the necessary information for the premiere tonight. Instead of recapping everything I learned or water in this post, I’ll share one of my Instagram highlight reels about Game of Thrones. Surprisingly people have said they’ve been a good refresher of the earlier seasons, but I feel like I put a lot of unnecessary information in there. Like my excitement about Brienne’s love story. 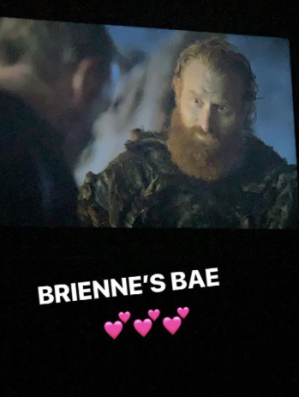 Currently, I have a lot of favorite characters. The biggest ones are Arya and Sansa Stark, Tyrian, though we haven’t seen a ton of him lately, and Brienne because I am so invested in her budding love story with the wildling.  I was disappointed that Margaery died, and the way the youngest Stark boy died was really upsetting. I’m glad Ramsay is gone, though, despite not wanting to watch a lot of that episode. Cersei is literally the most terrifying person I can think of to be on the throne, but I had a feeling she’d take over for awhile at some point. I am fully invested in all the battles that are about to happen, and I’m hoping a Stark will be next to rule, though if I had to make a prediction, I’d say Daenerys Targaryen will be the next person to take it.

I’m not a huge fan of Jon Snow or Daenerys right now. I wrote out why, but I want to wait to share my opinions until I am a little more sure of them. It looks like they’ll be working together some in season 7, and I hope they become my favorites once again because they started out being in my top 3. I just don’t feel like they’ve been as dynamic as some of the others, and have both become a little too blinded by power.

I would love to see one of the Stark girls as the next queens because I think they’ve had so many hurdles they’ve had to jump over and they’ve grown so much. I never liked Sansa when Joffrey was around, but now she’s one of my favorite characters. It’s crazy how this can happen in this show. Same goes for Jaimie Lannister; I really didn’t like him when he pushed Bran out of the window and was all creepy with Cersei, but now I think he’s hilarious and a pretty decent guy. I’m hoping he won’t die this season, but I have a kind of bad feeling season 7 is going to be his last. Anyway, I feel like Arya and Sansa would be an incredible team. Sansa has become fair and just, and knows what kind of ruling can completely ruin a kingdom. She isn’t full of herself and is firm in her beliefs but willing to listen to others, not just hear what they’re saying. I don’t know, but I kind of think she and Arya would make a great team. The beginning to season 7 was so badass and Arya is honestly one of the coolest characters. She literally has no one backing her but has made it so far all on her own. She’s met every kind of person along the way, and I think she’s learning how to read others really well.

Okay, I should really start paying attention so I can be ready for tonight.