This past weekend one of my best friends and I went to a fair in our town. There were rides, games, food stands, bands, and perhaps the most exciting — a silent disco.

Since I have POTS I’m not able to go on rollercoasters or anything that will make my adrenaline and heart rate spike so much, and we weren’t very interested in the bands playing. We are always excited about dancing, though. For those of you who don’t know what a silent disco is, it’s pretty simple. Basically you check-in and get a pair of headphones with a volume control and 3 stations. There are 3 DJs located at the front of the club, each playing their own mix. You can change channels to find a song that you like, and your headphones light up with whatever color the DJ you are playing is wearing. 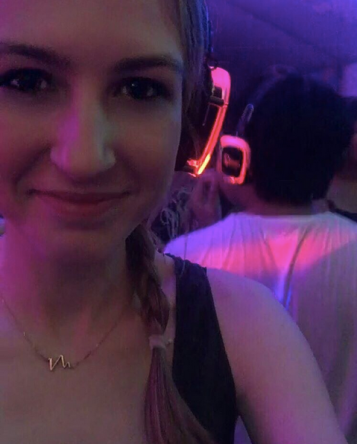 One of the most hilarious parts of the silent disco was the crowd of people who showed up for it. It was for people 18+, and we were literally the only twentysomethings in the mix. It seemed to be mainly high school kids from the area dancing, but there was also a healthy mix of people in their 40s and 50s.

I quickly realized how much guys my age (25) have matured since they were 18. The kids were crazy! They were flailing their arms about like they were on fire and bumping into everyone on the dance floor. Their way of flirting with us was making fun of our music choices (Sorry that I enjoy hearing throwbacks from the Backstreet Boys and Britney) and attempting to “bump butts” with us. I started to feel old as I was annoyed with this behavior.

Overall the silent disco was a blast. We danced until my knees started to hurt too much to keep standing and vowed to do another one again before next year. Even just sitting on the side and watching everyone dancing to a different beat is hilariously entertaining.

4 thoughts on “Dance To Your Own Beat”