If you follow me on Instagram you’ve probably already seen photos and little stories from this past weekend, but I am going to write a little about the ball, as promised.

Robert and I made our way to Richmond on Friday after my physical therapy appointment. I love traveling with him because we always have something to talk about and don’t just sit and listen to music the entire time.

We were hungry, so we stopped off at a little diner along the way. 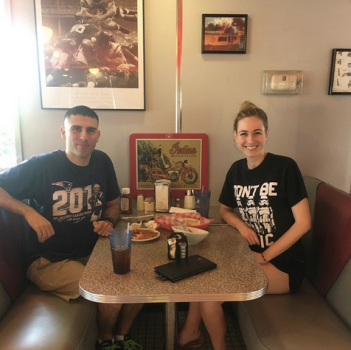 As many of you know, I am now gluten-free (And don’t eat nighthshade veggies, a few random fruits, or very much dairy) so it’s always a little annoying trying to find something good to eat. I was a little concerned about diner food, as it’s sometimes not the freshest produce, but I can almost always find something to eat anywhere.

Guys. I need to go back and get the name of the diner, because this was some of the best restaurant food I could have asked for! They had homemade hummus and the freshest fruit I’ve had at a restaurant. So good! 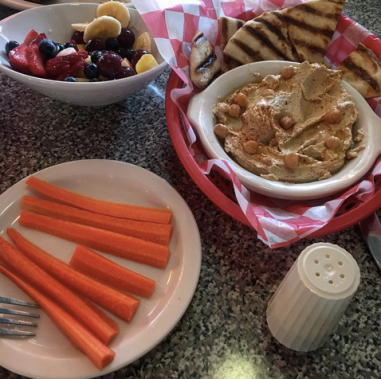 After that we hit the road again, and enjoyed each other’s company until we finally arrived at our hotel. Robert carried all of the bags with the exception of my purse and pillow (I do not travel light now that I have POTS to care for!), and we rested a bit before getting ready to go out to dinner and to the rest of the Army events that evening.

I chose the restaurant we went to — Texas Roadhouse — and we had a nice time catching up with some of Robert’s friends before going back to the hotel and mingling in some of their hospitality suites. I am still incredibly new to all things military so it’s kind of overwhelming trying to follow some of the conversations. My go-to move is smiling and nodding when someone says something I don’t understand. I’ll ask one or two questions, but I don’t want to essentially be quizzing officers on what their career entails, so I try to remember my questions to ask Robert later in the evening.

The next morning I woke up and ordered room service while I listened to a book on tape and got ready for the day. This was not only a ball, but it was also some sort of Officer’s Conference, so I attended the “military spouse” meeting that morning. After that I enjoyed more room service, and talked to my best friend while I waited for Robert to get back. 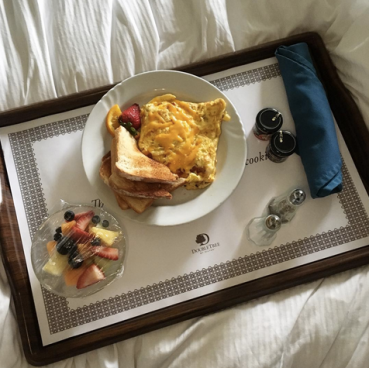 There’s something really relaxing about pampering yourself in a nice, soft hotel bed. Every time I sleep over somewhere I feel inspired to redo my room in the simplest way with just a giant, fluffy white comforter and maybe even a butler to bring me breakfast in bed. My dream Sunday mornings involve hot chocolate, pancakes, warm blankets, snuggling, and a good rom com. 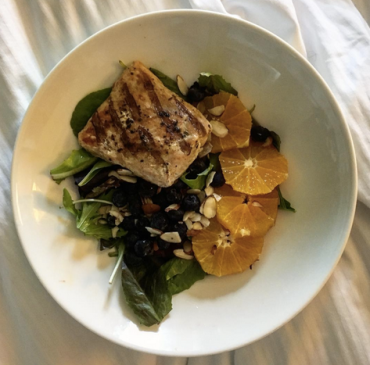 I slowly munched on my food as I got ready for the evening gala. I had a blast trying on my dresses again and trying to figure out which one to wear, along with what lipstick color I wanted to pick for the occasion. I know, I know — I could have done all of this at home. It was hard picking which dress made me feel better that day.

Up until the evening before I thought I would be wearing this formfitting white dress. I liked that it was elegant, a little sparkly, and perfect for springtime. The back had a gorgeous cutout, and although it wasn’t the princessy look I initially wanted to go for, I felt really good in it. At the last minute, though, I decided I liked my second option just a little bit better.

So I went with a blue dress instead! 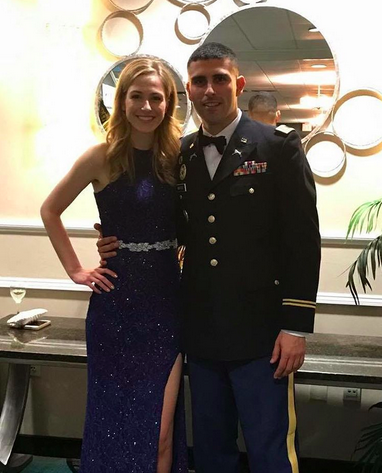 We had a really nice evening filled with conversation, food, and meeting new people. It wasn’t really what I had expected — the major complaint was that there was absolutely no dancing — but I still had a nice time and loved having the opportunity to dress up. Not to mention I got to see Robert in a dress uniform, which was kind of a fun occasion! I also didn’t feel way too sick until the end of the evening, which is always a major plus. 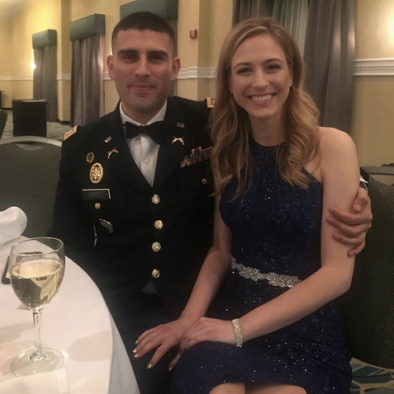 I told Robert that since there wasn’t any dancing that he would have to take me to another ball in the near future. After all, that was what I was looking forward to the most! I’ve never been to such a fun, fancy event with a boyfriend before, so we’ll just have to go to another that will have a DJ who will play Usher, Taylor Swift, and Selena Gomez so we can dance the night away.