I decided to create a brutally honest dating profile to see what would happen. Some questions I had going into this were:

A way I could have made this experiment even better would have been to use photos of myself with absolutely no makeup (contrary to popular belief, men, I do wear some!) and gone into even more detail about myself. I suppose I could have written that I have a dating blog, but I wanted the responses to be genuine without people wondering whether they would be written about. 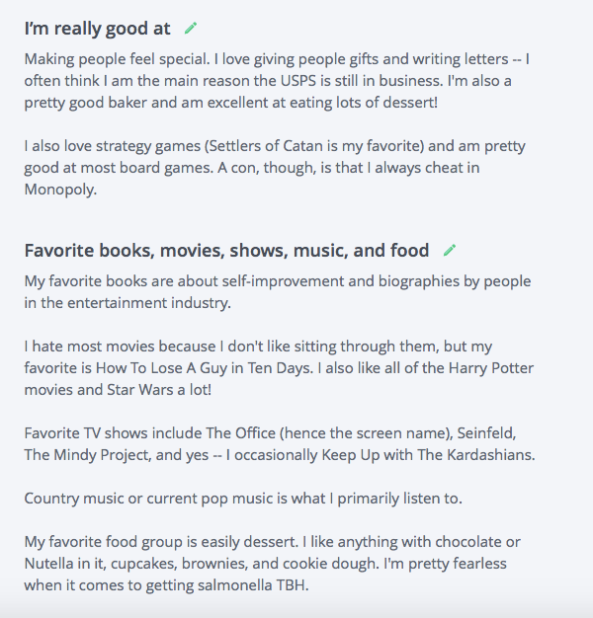 When I broke it down there were some people who clearly did not read my profile at all (I even compared some of these gentlemen with a friend who has the app and they sent her the exact same messages!), but for the most part people had sent messages crafted to directly address something I had mentioned in my profile.

I was surprised to find that nobody really got my reference from The Office (littledoglover), but I was shocked at how many people opened with a line about Pokémon, as they noticed the Ash Ketchum hat in my profile.

Some people asked me about my chronic illness, but it didn’t really seem to be a turnoff anyone who messaged me (Obviously there is no way for me to know how many people didn’t send me a message me because of it), even when I told them what it was called and how it affects my every day life. For the most part people skipped right over that and asked me questions about other things I had listed. Some enjoyed the pictures of my dog and I that were posted, others commented on the board games I liked or some of the goofy nerdier things I love.

Honestly I think what guys liked most about this profile was how genuine it was. I don’t think I’d say I’m great at a big list of things, but I would say that I am always myself no matter what situation life puts me in. My dating profiles always have a strong reflection of my character, but it’s interesting that not many things change even when you throw in a little too much information.

Today’s lesson: If you decide to create a dating profile don’t try to be fancy, different, or stand out — just be your beautiful self and you will surely attract the right people.